It isn't difficult to maintain the softness and fluffiness of towels. Maintain new towels so they don't become stiff and revive older towels using several remedies.

Detergent Is the Culprit

Soap residue is the main reason towels lose their softness. If you want to keep new towels fluffy or you've noticed your old towels have become stiff and are no longer soft, the first thing to consider is the accumulation of detergent trapped within the towel fibers. This residue is compounded by the use of softeners.

When you wash your new towels, reduce the amount you normally use in a load to maintain the towels' softness. If your towels are all ready stiff, cut back on the amount you have been using. Over time, if you continue to use less detergent, much of the residue will be washed out of the towel fibers. If this doesn't remedy the stiffness in the towels, there are a few other things you can try. 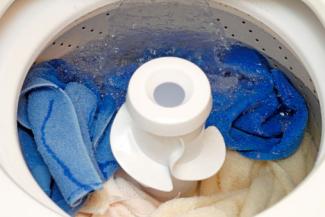 Use Warm or Hot Water Only

Warm or hot water are the ideal temperatures needed to break down the detergent for proper cleaning. Some people will only use hot water for towels and even forego warm water. They believe that the hot water temperature is the only way for the detergent to mix completely with the water. The hot temperature makes the detergent cleaning properties active and more effective in loosening up dirt and grim trapped in the towel fibers. Wash new towels in hot water and maintain them by continuing this throughout the towels' lives. If your towels are old and stiff, switch to using hot water if you've been using cold.

Fabric Softener Can Cause Stiff Towels 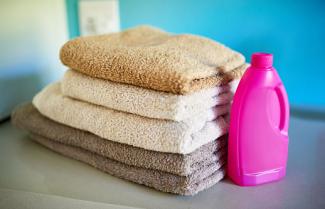 If you reduce the amount of detergent you use but your towels are still coming out stiff, there's a another possible culprit - fabric softener. As strange as it sounds, softeners alone can cause stiffness in towels. There is a simple cause found within most softeners: silicone.

Silicone-based compounds that are included in fabric softeners are added as a way to make the towel fibers bind easier with the softener. Unfortunately, over time, softeners containing this element can actually make fabrics repel water.

This small trick can restore softness to towels that have accumulated with softener residue, robbing the fibers of their natural softness.

One or both of these steps should resolve the stiffness in your towels. However, if your towels are still stiff, you may need to add one final ingredient - baking soda.

Sometimes the accumulated residue from detergent and softener is difficult to cut through. If you've tried all these tips and still have an issue, it's time to break out the baking soda.

If you feel your towels need a more aggressive approach to reconstitute them to their original softness, you can use the vinegar wash immediately followed by a second wash of one cup of baking soda.

This method will ensure that all chemical residue buildup is loosened from the fabric and your towels should come out softer. 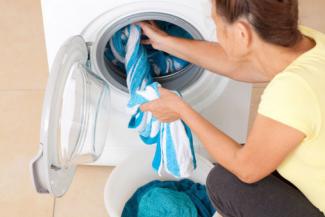 There are a few things you should do to ensure all your efforts to maintain or restore softness and fluffiness to your towels are successful.

Tips for the Dryer

The dryer can contribute to making your towels stiff. There are a few things you can do to eliminate this as an issue.

Once your towels have undergone washing and drying, the last step to keeping them soft and fluffy is how they are prepared for the linen closet and bathroom shelves.

It doesn't take a lot of time to care for towels. If you follow some or all of these steps, you can ensure your towels last a long time and retain that nice soft and fluffy feel every time they're used.

4
Comments
© 2006-2020 LoveToKnow, Corp., except where otherwise noted. All Rights Reserved.
Resources, Advice & Tips for Covid-19
Read More
How to Keep Your Towels Fluffy and Soft