The answer to the question - what is a duvet - is threefold. It is a way to spruce up and change your bedroom décor, protect your expensive comforters, and get rid of those annoying top sheets. What Europeans have known for centuries, is that a duvet saves you time, while stretching your bed linen dollars for all they are worth.

What is a Duvet

Mentioned in recorded history as far back as the 16th century, duvets were the fashion in rural Europe and even the Far East. Travelers through Europe, including France, Germany, and Italy, took note of duvets for their lushness and heaviness.

Duvets reminded some back then of a feathered bed unto itself. While fine mattresses were stuffed with, down and feathers from ducks, geese, and even swans, so too were duvets and their covers used to transform them into sheet, blanket, and comforter all in one. Traditionally, a duvet and its accompanying cover were used by itself as an all in one piece of bed linen.

Today, the duvet cover can both cover and protect actual duvets still - a rectangular bag of fabric filled with expensive things such as down, feathers, etc. - and as a cover to protect less expensive, mass-produced comforters or blankets.

In terms of any household investment, they can help extend the life of any type of duvet or blanket and can keep one's bed linens going for years to come.

The Initial Expense of a Duvet vs. the Long Term Savings

A good quality duvet today can be made out of a variety of materials, including organic cotton, silk, various gradations of fine wools, and even synthetic fibers. Ideally, for length of wear, one should invest in the best bed linens one can afford. It is especially true in the case of duvet.

Whether one is purchasing a true duvet or a duvet cover to cover a specially cherished blanket, quilt or comforter, choose a duvet of the highest affordable quality. As the duvet cover will serve as the sheet, as well as the blanket, one may want to take the money you usually spend on sheet sets and invest in at least two duvet covers per duvet, per bed, per room.

One's actual savings costs are going to come in a variety of ways, such as:

Both Thumbs Up for the Duvet 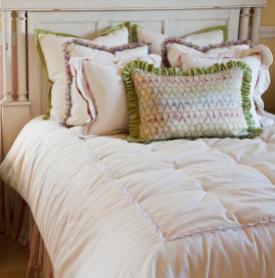 While a duvets' thermal performance is calculated by its tog rating (the higher the tog rating, the warmer the actual duvet), its cover can be made from all sorts of cloth, as heavy, as rich, and as textured as you like.

Duvets can be difficult to find, but you can usually purchase one at Amazon.com. Also look for special store sale days and additional coupons as well, and do not forget those January white sales!

Before investing in a duvet, measure a favorite comforter and find a duvet cover that will fit over it. Try the look and see first what a difference a cover can make to the weight of the bedding and the décor of the room.

A homemade duvet cover is still a duvet cover. The simplest way to make one is to find a set of sheets as close to the length and width of your duvet or comforter as possible. Sew on five or six extra inches of some favorite material to each side, pin the outsides together, and sew three sides together. After slipping in your duvet or comforter, use Velcro to close the final side.

Getting a Duvet Cover On

It does not have to be a tortuous process when it comes to slipping a duvet cover on. Simply do this:

0
Comments
© 2006-2020 LoveToKnow, Corp., except where otherwise noted. All Rights Reserved.
Resources, Advice & Tips for Covid-19
Read More
What Is a Duvet