Adding a fleur-de-lis king comforter to your bedroom décor is a simple way to bring a touch of natural beauty to your home. The print is both symbolic and elegant, wrought with historical meaning yet strongly recognized in the style community for its distinctive appearance.

Fleur-de-lis, occasionally known as the fleur-de-lys, is a French term that means lily flower. The iconic symbol depicts a stylistic version of a lily, composed of three petals that bind together at the base. The soft curves of the outer petals fall to sharp points, while the middle petal extends upward and finishes at a sharp point.

Historically, the fleur-de-lis represents French royalty, thanks to its appearance on king's shield in the 12th century. Years later, the English adopted the symbol, applying it to their coat of arms in recognition of their claim over the French throne. The fleur-de-lis has also been used in religious venues, most specifically in the Catholic Church as homage to the Virgin Mary. The three petals are often seen as a symbol of the Holy Trinity.

In modern times, the fleur-de-lis motif is seen on everything from jewelry and clothing to home accessories and even baseball caps. It tends to be bold, and its popularity in Hollywood in particular has given it extra credence in the fashion world. In home accessories, such as kitchen wares and bedding, its appearance runs the gamut from diminutive to daring. 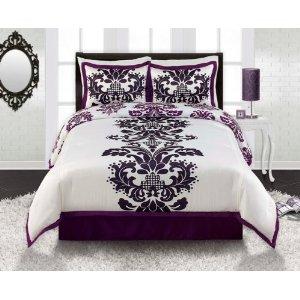 If you're in the market for a fleur-de-lis king comforter, you're in luck. There are several styles available. No matter what your preference - light, dark, demure, or ostentatious - you're likely to find something that goes well with your existing bedroom décor or contrasts it just enough to create a visually intriguing statement. Be prepared, though, to do a bit of searching. While the fleur-de-lis pattern is often used in various types of home décor, it is slightly less prominent for comforter designs in particular.

What to Look For

Bear in mind that your comforter color palette can play a strong role in the overall mood your bedroom conveys. The fleur-de-lis pattern naturally leans toward the dramatic and romantic, and often the colors used for comforters featuring the design reflect this mood. Yet there are vastly different fleur-de-lis comforters available; many bear completely unexpected designs, incorporating modern color combinations and vivacious prints for a more adventurous approach to the otherwise old world-inspired print. Pay attention to the size of the print and the colors when choosing the appropriate comforter for your bedroom.

Consider your price preference when shopping around. King size fleur-de-lis comforters are often packaged in sets that include complementary pillow shams, bed skirts and accent pillows, but they may occasionally be available à la carte, too. Here are a few stops to consider in your search for the perfect fleur-de-lis comforter:

While some comforters are quite pricey, it is possible to find gorgeous, high-quality pieces that won't break the bank. Pay a visit to the bedding sections at discount retailers like Marshalls and TJ Maxx for selections of high-end bedding at lower prices. Note that fleur-de-lis comforters aren't entirely common; you may have to check back from time to time before you find just what you desire.Also, pay attention to the return policies of online retailers. Consumers often discover that the colors do not appear the same in real life as they do on a computer screen. This is especially important with fleur-de-lis prints, which are typically intricate and tend to give great personality to a room.